Do you remember Paragon Park? Listen to our conversation with park historian, Chris Haraden

Chris Haraden and his son, Matt, in the 95.9 WATD studio.

Local Paragon Park historian Chris Haraden was our guest last night on My Generation, broadcast live on 95.9 WATD-FM, from 7-8:00 PM. Chris is compiling the first comprehensive history of the historic amusement park that flourished along the shores of Nantasket Beach in Hull, Massachusetts, from 1905 until 1984. His book will be published this coming spring. If you remember Paragon Park–or even if you don’t–you will enjoy this lively discussion. Click on the audio link below and take a trip back in time!


Learn more about the Paragon Park Book, including photos and history, at this site. 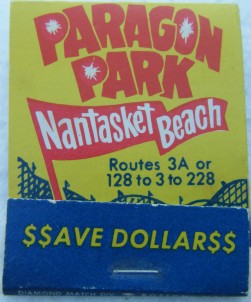 It’s hard to believe that it’s been more than 30 years since Paragon Park closed for good.
In late December 1984, Larry and Phyllis Stone announced that a sale was pending to the Kahn-Quinn Group of Woburn. Not long afterward, the condominium developer decided that opening the place up to souvenir hunters and nostalgic thrill-seekers for one final season was too risky.
Without even knowing it, we’d had our last ride at Paragon Park.
Even harder to believe is that in those years, no complete history of the park has been written. Until now, that is.
We are putting together the definitive history of the place once known as “the playground of New England.”
This coffee-table-style book is expected to be completed and ready for sale by next summer, which will be the 30th anniversary of the summer that Paragon Park and its landmark roller coaster disappeared from the skyline.
The book will chronicle the creation of Paragon Park by George A. Dodge in 1905 in the aftermath of the state’s takeover of Nantasket Beach in 1899, which forced many of the amusements to Hull’s first open-air park at Nantasket Point (now Sunset Point) in 1901. David Stone and Albert Golden took over in 1920, and after Stone bought out his partner, his family guided the park through the second half of the 20th century.

Is a REVERSE MORTGAGE right for you?

Don’t be a victim!